The Sykia has roots that are lost in the mists of time and is considered one of the oldest villages of Halkidiki.
The prehistoric settlement at the top of the mountain above the village of Sykias, the Koukos, we indicate that the area inhabited by the Early Bronze Age.

The summit plateau of the Koukos, surrounded by the castle, which flourished an important prehistoric settlement. Excavations by archaeologists have shown that the area has been inhabited since the 11th century BC and habitation was probably due to the rich sources of copper began to exploit the middle Bronze Age.
For the vast history of the general area tells us more a prehistoric tomb found in Kriaritsi few kilometers south of the Sykias. 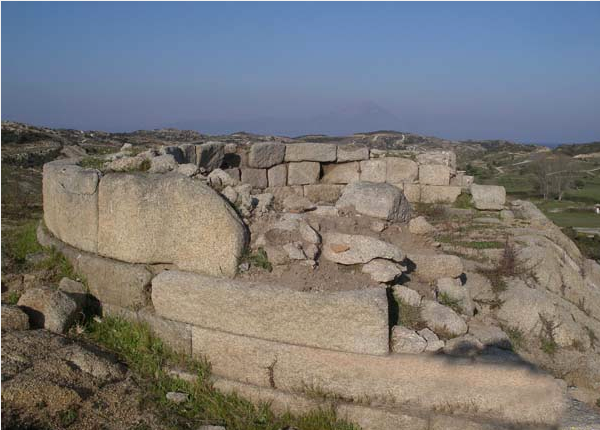 There in the area of ​​Kriaritsi Sykias revealed prehistoric tomb dating from the late middle to late phase of the Early Bronze Age ( 2300-1900 BC ) . This artificial hill, wide covered 30 tombs with circular enclosures , each of which contained pottery with the ashes of the dead. The importance of this finding lies in the uniqueness of the region of Macedonia , and enriches our knowledge of the funerary practices and methods of construction of burial mounds in the Bronze Age .